The tradition of honoring exceptional CSI faculty, staff, and students continued in 2014 with the Annual Dolphin Awards ceremony.
Read More 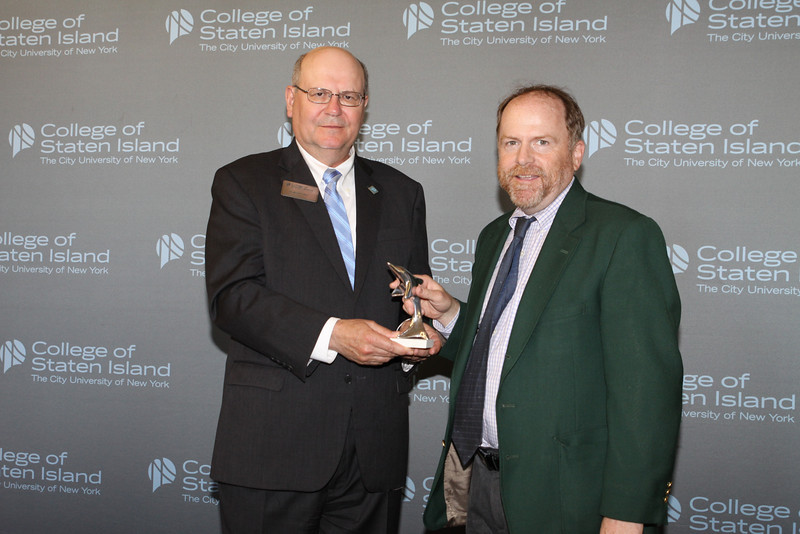 Dolphin Award for Outstanding Teaching by a Member of the Full-Time Faculty: Richard Flanagan, Associate Professor, Department of Political Science and Global Affairs

You joined the Political Science faculty at the College as an Assistant Professor in 1999, and you rose to the rank of Associate Professor in 2005. You have also been the Chair of the Department of Political Science and Global Affairs since 2013. You earned a BA degree in Political Science, cum laude, from Drew University and a PhD in Political Science from Rutgers University. This is your second Dolphin Award, as you were honored for Outstanding Service and Contribution to the College by a member of the Full-Time Faculty in 2009. Now, we have the honor of focusing on your exemplary commitment and dedication to teaching. You have been described by a fellow faculty member as “one of the most effective teachers I have encountered.” Students who have been fortunate enough to have you as an instructor emphasize that you constantly believed in them and encouraged them to succeed. You have also been called a patient and supportive mentor, and a comprehensive and impartial teacher. Your stellar performance in the classroom consistently receives outstanding student evaluation scores. As a faculty member, you also endeavor to prepare our students for future careers in public service through your supervision of internships at public and not-for-profit institutions, with a total that exceeds 300. Your scholarship is also exemplary, with its focus on Staten Island and New York politics. You have made numerous contributions to the literature of the field, including three books, with another underway on Mayor DeBlasio. Beyond the admiration and respect of your students and colleagues, your work has also earned you a number of awards and grants, including your past Dolphin and two Student Government Awards.

You exemplify CSI’s ideal of a teacher who empowers students to succeed.